The first meeting of the newborn Industrial Division of the Esseco Group was held on Friday, 29 April 2022 at the Hydrochem production unit in Pieve Vergonte (VB). It saw the participation of all the managers and executives of the companies Altair Chimica, Altair Iberica, Hydrochem Italia, Esseco and Zolfindustria. Guests of honor, of course, were the shareholders, Piero and Francesco Nulli, and two representatives of Esseco UK, Luca Mantovani (Managing Director) and Ruggero Pellegrin (Plant Manager). 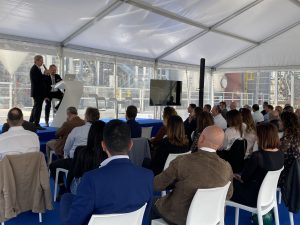 The meeting, which lasted all day, began with the intervention of Eng. Roberto Vagheggi, the new General Manager of the Esseco Industrial Group, who illustrated the past, present and future strategies for the division.

The creation of the Industrial Division of EG, which took place in November 2021, responds to the need to adopt a common strategy for this sector, to study a unitary path of growth for the future and to exploit the best talents of the various companies in a wider way than happened in the past. This strategy already makes it possible to make better use of all the synergies that can be achieved and leverage existing best practices within the companies of the group, which operate in often partially overlapping or complementary markets.

As for the future strategy, this leverages, above all, on CONTINUOUS GROWTH, which allows the various companies to cope with the constant aging of the plants and to adequately reward the growing skills of the people who work there. This growth involves in a positive way all the stakeholders (the “stakeholders”) of the company: shareholders, managers, operators and collaborators, suppliers, customers, institutions and communities in which we operate, Italy as a whole.

A second important element of the strategy is the ORGANIZATION: all companies will have the same organizational structure. They will be structures based on meritocracy, guided by the desire for excellence, capable of enhancing the best talents, the most passionate people who believe in the company project.

Finally, to continue and support growth, we will continue to work to make the most of the resources present in each site, such as hydroelectric power in Pieve, geothermal energy and salt in Saline, sulfur in Trecate. Production will increase, further increasing the share destined for exports and enriching the portfolio of new products. We will work even more to search for new integration opportunities upstream and downstream of production processes, as it has always been done, looking for synergistic companies with which to merge.

The new challenges awaiting Esseco Group have been the basis of the decision to create the Industrial Division: as today the companies that are part of it are more mature, the challenges they have to face are increasing. That’s why the talents who work in the various companies must come out and make their contribution in meeting these new challenges, which briefly go in two clear directions: on the one hand, a new optimized organization, which ensures effective and ethical governance of the business; on the other hand, the achievement of ambitious goals of environmental and social sustainability.

The intervention of the engineer Vagheggi endede with a wish for all the collaborators of the Esseco Group‘s Industrial Division: that they can be passionate about creating an ever larger, more performing company full of happy, collaborative people, proud to work for a shared mission.

Before lunch, the meeting continued with the intervention of Eng. Annalisa Montagnani, Energy Manager of the Industrial Division, who spoke about the key theme of energy management within the Industrial Division. In 2021, the electricity consumption of all the companies combined reached 265 MWh, equal to the average consumption of 98,000 households. The energy mix used included hydroelectric and steam turbine energy, free of CO2 emissions; energy from high-efficiency cogenerators, one of which captures CO2 emissions for reuse in other processes; the first photovoltaic systems. Self-production covered 52% of consumption, growing in the last three years and destined to have an even greater boost in the coming years, thanks to long-term contracts that are being signed with solar energy producers in Lazio and Abruzzo. These projects will bring self-production to 74% as early as 2022. 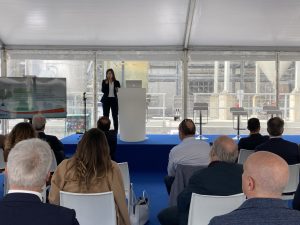 Subsequently, Dr. Andrea Busseni, plant manager at Hydrochem Italia and a great expert in environmental aspects spoke and illustrated the main projects carried out or still in progress in environmental sustainability, starting with the reclamation, completed in 2020, of the chlorosoda plant with mercury cathode cells, which involved the production plant in Pieve. The asbestos remediation plan has also been launched here for years, which will make it possible in the next few years to free up additional volumes of currently abandoned buildings, in order to make them available for new plants. An identical remediation of asbestos has also concerned the Saline di Volterra plant for several years. 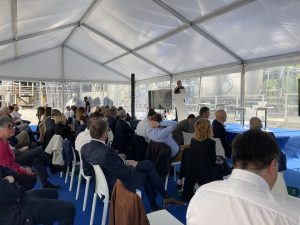 Another pillar of the strategy regarding environmental sustainability concerns the reuse of volumes of abandoned areas, which involved, after meticulous phases of reclamation, the buildings of the rooms that contained the former mercury cathode cells, both in Pieve and Saline, as well as various former production areas of the Trecate plant.

As regards the production of waste per ton of product, the set of companies that are part of the Industrial Division of the Esseco Group has carried out a work of strong optimization of production processes, which has allowed, with regard to halogenated residues in particular, to go from over 6% in 2012 to 1.5% in 2021. This halogenated residue recovery program is intertwined in Pieve with the modification project of the existing thermo-combustion boiler, which will have the dual function of reducing emissions from Chlorine-aromatic plant and partial recovery of chlorinated organic residues, with energy recovery in the form of heat.

The change will allow to obtain, in addition to energy recovery and a lower methane consumption, a reduction of dangerous goods traffic by road, eliminating cross-border notifications of waste and closing completely the production cycle within the Site. Both in Pieve, in Saline and in Trecate, programs are also underway to reduce the collection of well water for productive needs (cooling of the plants), which also include a partial recovery and recycling of the water withdrawn. The interventions have allowed, first of all, a significant water saving; secondly, a decrease of the quantities of contaminated water sent to waste water treatment.

Many other projects are underway in all the factories of the Esseco Group, with the aim of achieving ever greater environmental sustainability.

The intense day of work ended with the last intervention of the engineer Roberto Vagheggi, who resumed some of the major challenges that await the Esseco Group’s Industrial Division in the coming years and outlined the main guidelines for maintaining and increasing the profitability of the Division’s activities.

The extensive investment plan was illustrated, which concerns all production sites, both for the current year and for the next three years.

The brilliant results of the industrial division in the first quarter of 2022 were shown. The Industrial Division has prepared a very aggressive 2022 budget, which, to this day, is widely respected.

The performances of all the main products were illustrated, with a special focus on those with the highest growth rate, with an invitation to follow these trends throughout the product portfolio.

Finally, a chapter was addressed regarding the many investments made by the various companies in the last ten years, illustrating the economic return, measured as a function of the invested capital. Many of the projects described recorded exceptional performances, which explains the excellent economic results of the various companies.

The meeting ended by giving appointment to the next event, which will be held towards the end of the current year, in which the results of 2022, the 2023 budget and the progress of the strategic projects of the Industrial Division will be illustrated.

The next appointment will also involve all the other non-Italian companies of the Industrial Division, which currently has 11 corporate groups.

Sustainable development is increasingly a point of competitiveness for companies. Esseco Group is following a path to achieve full energy…

On 31 October, Italian leading newspaper Corriere della Sera published an article in its Finance and Business section, from which…

Together with Passion and Receptiveness, the Responsibility - individual and Social - has always been at the center of the…